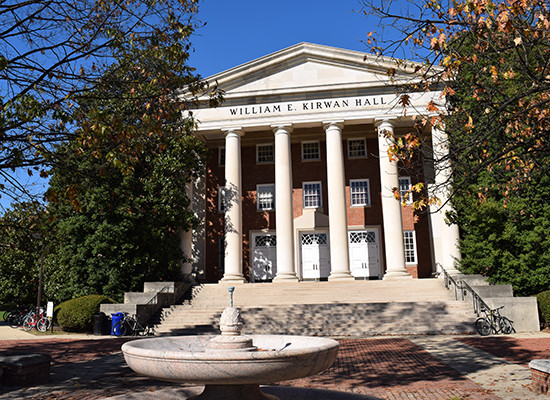 Welcome to the Department of Mathematics
at the University of Maryland, College Park

The College Park Campus of the University of Maryland, located in the suburbs of Washington, D.C., consists of 1300 acres of Georgian style buildings, trees, grassy malls and recreation fields. Although the University of Maryland was established in 1920, the College Park Campus was opened in 1859 and the Graduate School was established in 1919. The university currently has over 30,000 undergraduate students in over 100 degree programs and approximately 9,000 graduate students enrolled in 87 master's degree programs and 68 doctoral programs. Since 1937 the Mathematics Department has awarded more than 550 Ph.D. degrees.

The rapid growth of the University and the Mathematics Department has accompanied the development of the state as a whole. More importantly the Washington metropolitan area has become a center of intense scientific activity, in which the University of Maryland plays an important role as a focus for advanced research. 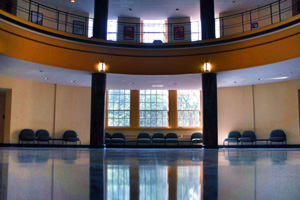 The Mathematics Department has risen to a high national ranking with a distinguished faculty of about 60 professors whose research interests span many vital areas of the mathematical sciences. Several members of the Department also hold joint appointments with interdisciplinary research centers at the University, the Institute of Physical Science and Technology (IPST) and the Center for Scientific Computation and Mathematical Modeling (CSCAMM).

The Department of Mathematics is housed in the Kirwan Hall on Campus Drive near U.S. Route 1. The Mathematics Department shares this building with the STEM Library, giving students convenient access to the books and journals of mathematics as well as those of physics and engineering.

The Physics, Chemistry, and Engineering Departments occupy adjoining buildings. The Computer Science Department, and the Institute for Physical Sciences and Technology buildings are a few minutes away.

Though the College Park Campus is on the outskirts of Washington, D.C., it is also within a few minutes drive of the pleasant rural Maryland countryside. Downtown Washington, D.C. offers its many cultural attractions such as the Smithsonian Institution, the National Gallery of Art, and the Library of Congress. The state capital of Annapolis with its picturesque waterfront, Naval Academy and boating facilities is twenty-five miles away as are beaches on the Chesapeake Bay. Further to the east are the ocean resorts of Maryland and Delaware and to the west the Appalachian Mountains with ski resorts and public parks for hiking and camping. The city of Baltimore, with its rich ethnic heritage and culture, is only thirty miles from College Park.