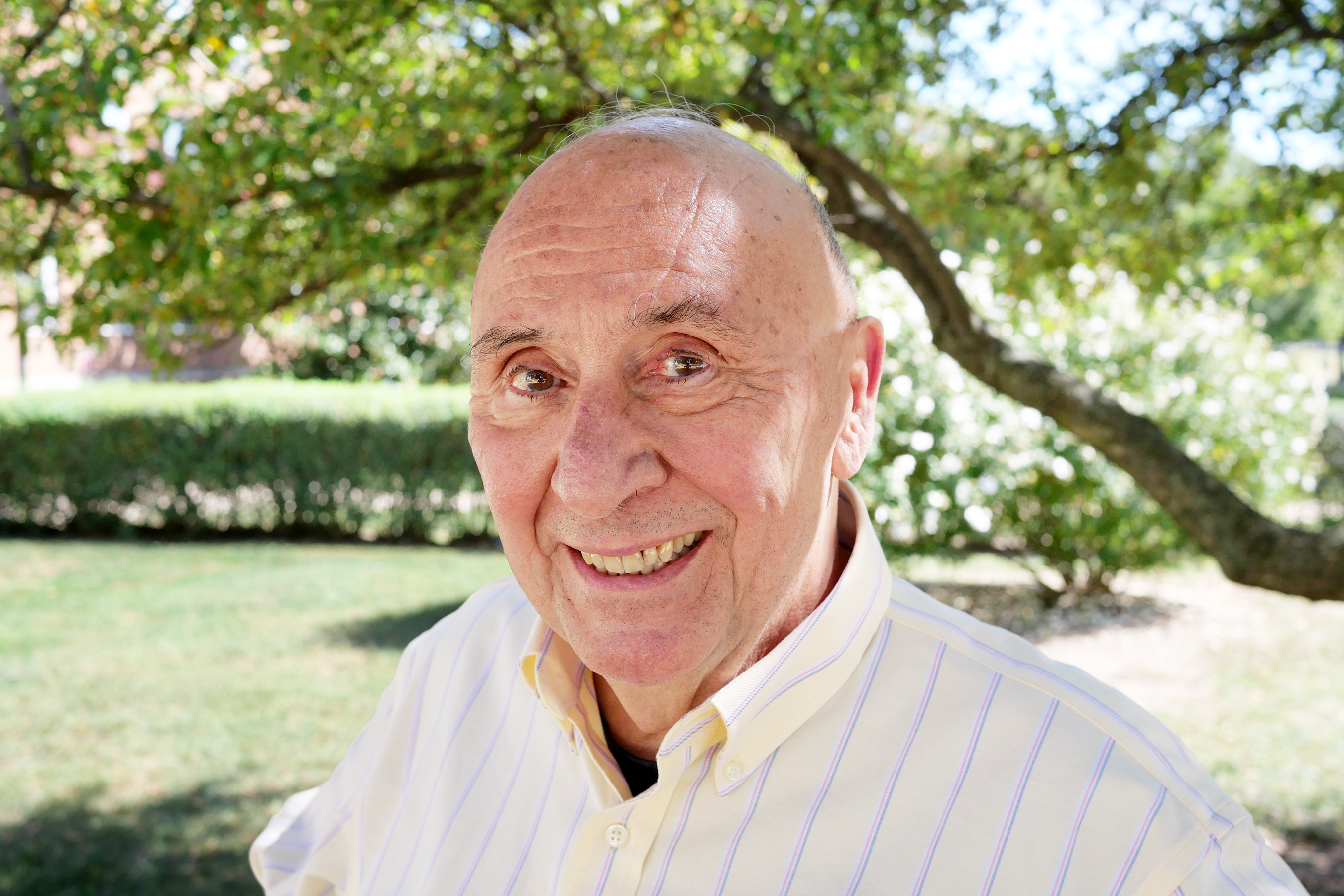 From current students to world-renowned alumni, mathematicians from five continents filled the house for a three-day 80th birthday celebration and conference.

In the world of mathematics, Professor John Benedetto is by all accounts a family man. The depth of his devotion and the impact of his parenting was on full display this past September, as 175 mathematicians gathered to celebrate Benedetto’s 80th birthday. In the tradition of academics who trace their lineage through their Ph.D. advisors, many of the participants proudly self-identified as Benedetto’s children, grandchildren, nieces and nephews. In his 54-year tenure at UMD, Benedetto has advised 58 Ph.D. students who, according to the Mathematics Genealogy Project, have gone on to mentor another 92 Ph.D.-carrying mathematicians.

The celebration hosted by the UMD Department of Mathematics and the Norbert Wiener Center for Harmonic Analysis and Applications, which Benedetto directs, was a three-day jubilee of Fourier analysis and applications. Benedetto’s former graduate students and other premier mathematicians presented 17 talks, that spanned a range of topics from wavelet theory, Lie groups, dimension reduction, Grassmannian frames, neural network architecture, spectral synthesis and the mathematical theory behind deep learning, among other things.

The scope of the conference reflected the depth and breadth of Benedetto’s impact on mathematics as did the interaction among participants after the talks.

“It was something of a challenge to develop the program for the talks,” said Radu Balan, a professor of mathematics at UMD who helped organize the jubilee. “We wanted to represent all the topics John contributed to significantly during his career. We expanded a two-day conference to a three-day conference, and still it was impossible to cover everything, because John has been so unusually productive.”

For his part, Benedetto is immensely proud of “la famiglia” as he and his students call it, which is why he agreed to a jubilee in his honor.

“I went along with the idea of a party because I thought maybe we could have a fantastic conference, which we did,” Benedetto said. “Some of these people are really stars, and the talks were amazing.”

The conference offered current postdoctoral fellows and students the opportunity to meet some of Benedetto’s former star students. Speakers included Matthew Fickus (Ph.D. ’01, mathematics), an expert on equiangular tight frames, which factor into some of the deepest mathematical work in spherical designs and coding theory, and Fulvio Ricci (Ph.D. ’77, mathematics), who is world-renowned for making fundamental contributions to the field of abstract harmonic analysis.

Benedetto’s graduate students have always been able to network with top-tier mathematicians, whether at UMD or at conferences.

“When you’re a graduate student of John’s, you get to meet all these important people in the field, because everyone wants to spend time with him,” said Emily King (Ph.D. ’09, mathematics), an assistant professor of mathematics at Colorado State University.

King gave a talk during the jubilee on Grassmannian frames. Like many of Benedetto’s students, King chose to pursue her Ph.D. at UMD because of him.

“He’s such a genuinely nice person,” she said. “And the networking that comes with having John as an advisor helps you later on in your career.”

The refrain “genuinely nice person” is heard often in conversations about Benedetto.

“The one thing that stands out about John that no one can miss is that he is a really nice guy, one of the nicest guys I know,” said Doron Levy, interim chair of UMD’s Department of Mathematics. “His contribution to UMD has been tremendous in terms of productivity, quality of work, and the number of graduate students he has mentored. And under his guidance, the Norbert Wiener Center has positioned the university as a leader in research and education in pure and applied harmonic analysis.”

Benedetto has been the director of the Norbert Wiener Center since its founding in 2004 by the department chair at the time, Mike Fitzpatrick. Every winter, the center hosts the February Fourier Talks, a two-day conference that brings together researchers from academia, government and industry to promote interaction between the pure and applied sides of harmonic analysis research.

By the late 1980s and early 1990s, Benedetto was already known for his work in harmonic and Fourier analysis when he helped pioneer the study of wavelets, which is a branch of mathematics used in data compression and classification. The notion of wavelets presented a new way to express complicated functions with a discrete beginning and end, unlike the sine/cosine functions used in harmonics, which oscillate indefinitely. During the early 1990s, Benedetto found himself at small, exclusive meetings of engineers, physicists and mathematicians discussing the emerging theories and tools made possible by wavelets.

“There was this convergence of fields working together,” Benedetto said of the early days of wavelet theory. “It was spectacular, because we were doing things in mathematics that were ultimately wavelet theory, and at the same time other people were doing similar things in image processing, speech processing and theoretical physics. All of a sudden our very diverse communities were talking to each other in a substantive way.”

As the various disciplines converged around wavelets, the need for a repository of ideas and applications became evident. In 1994, Benedetto became the founding editor-in-chief of the Journal of Fourier Analysis and Applications, published by Springer-Birkhäuser, which he continues to edit today. Under his leadership, the journal became influential in the field and eventually lead Benedetto to develop a book series that explores the interface between applied mathematics, science and engineering. As editor of that series, titled Applied and Numerical Harmonic Analysis, Benedetto has shepherded more than 100 volumes into print.

Despite these accomplishments, Benedetto tends to shrug off his direct contributions to mathematical theories and applications as incremental.

“I’ll get a little idea I want to look into, and I’ll write a couple of papers on it, and then I move on,” he said, describing the running lists he keeps of things that interest him. “I don’t necessarily have the stick-to-itiveness that others do, but sometimes others carry on with the ideas I’ve put out there.”

Benedetto’s modesty belies his influence on the field. His work has rippled through the mathematical world. For example, a 2006 paper published in the Journal of Advances in Signal Processing with Joe Kolesar (Ph.D. ’04, mathematics) was partially responsible for enticing frame theorists into working on the Grassmannian packing problem, according to King who studies Grassmannian frames.

Benedetto was also instrumental in setting the course of many students’ careers.

“As my advisor, John gave me a problem that deals with how to equally distribute points on a sphere and how that relates to frame theory,” Fickus said. “That was 18 years ago, and I’ve been working on it ever since.”

In addition, some of Benedetto’s earlier contributions are coming back around to influence current theories.

“Some of the mathematical tools and results that John contributed early on in his career are now being applied to super resolution, which refers to mathematical methods for increasing the details captured in digital imaging technologies such as MRI and microscopy,” Balan said. “John’s earlier work is being referenced more and more in this area.”

In addition to his professional successes, Benedetto acknowledges personal successes as well, as a loving father and husband. His other mathematics “famiglia,” the one that bears his name, consists of his wife Cathy (M.A. ’68, mathematics; Ph.D. ’95, education, curriculum and instruction) and his three sons, two of whom are UMD-educated economists. The third is a mathematics professor at Amherst College who studies number theory. The father-son pair occasionally teams up to publish research papers.

“A number of years ago I saw that there were things to do with number theory and wavelet theory that had not been done, and I couldn’t solve one of the problems, so I reluctantly went to my son,” Benedetto remembered with a laugh. “We’ve now written five papers together.”

Currently, Benedetto said he would like to understand quantum mechanics better, and he hopes to continue bridging mathematical ideas on super resolution with what engineers are working on.

“I’ve got a huge stack of things I’d like to explore,” he said. “I’ll probably never get to all of it, but that’s OK. I can’t complain, I’ve been so fortunate to be able to do what I do. I’m having so much fun doing math.”