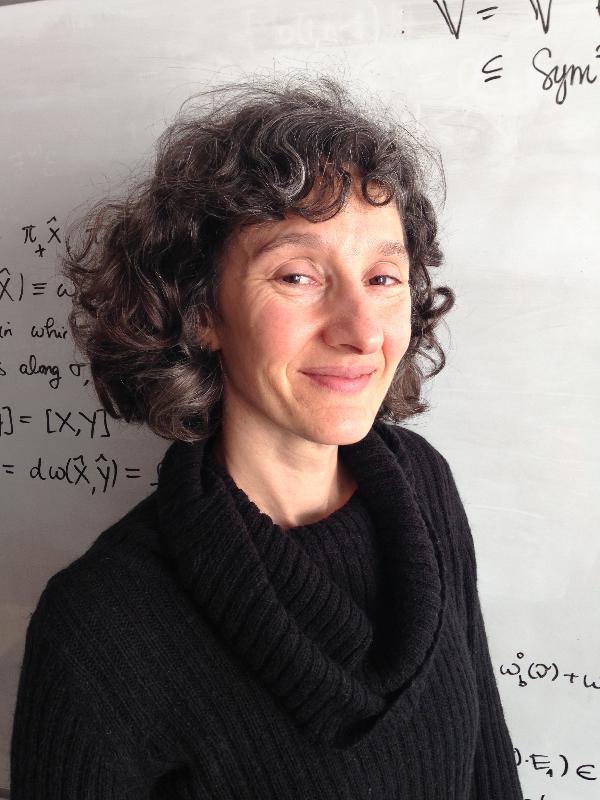 An expert in differential geometry finds beauty and harmony in mathematics.

Growing up, Karin Melnick never imagined herself as a mathematician. The daughter of an accountant and an airline pilot with a background in electrical engineering, she was no stranger to the importance of math, but she saw it more as a tool for other fields of study, a prelude to a career as an ecologist or a medical doctor.

That changed during her undergraduate years at Reed College in Portland, Oregon, when the pull of geometry, calculus and theoretical proofs drew her in, and she realized pure mathematics was the field for her.

This year, Melnick, an associate professor of mathematics at the University of Maryland, received the Joan and Joseph Birman Fellowship for Women Scholars from the American Mathematical Society (AMS). The award was established in 2017 to “address the paucity of women at the highest levels of research in mathematics by giving exceptionally talented women extra research support during their mid-career years,” according to the AMS.

“I am very pleased to have won the award and very grateful to Joan and Joseph Birman for their vision and generosity in establishing this fellowship,” Melnick said. “I’m going to use the award to reduce my teaching schedule so I can focus on research.”

Melnick will spend this summer and fall in Germany working with collaborators at the University of Münster and in Strasbourg. She may also use some of the $50,000 award to help pay for child care for her young son. Most research awards can’t be used to cover child care, but the Joan and Joseph Birman Fellowship expressly includes such expenses to address a significant challenge that affects many mid-career researchers, especially women.

Melnick studies a branch of math called differential geometry, and she is a leader in a specialty area within that called Lorentzian geometry. Like the simple geometry most students learn in high school, Melnick’s work involves studying and measuring spaces—distances, angles and volumes—but the spaces she works with generally can’t be visualized. They tend to exist in a higher dimension.

That’s a very different focus than the one she expected to pursue when she entered college.

“I was active in the environmental movement, so I thought maybe I would study ecology,” she said. “Then I kind of drifted towards studying premed, but I was so enjoying my math classes that I decided I would major in math and then go on to medical school.”

But looking back, her passion for theoretical mathematics had always been there. As early as high school, the abstraction made an impression on her and she was drawn to the challenge of it.

“In high school, I used to stay up late studying the tiny bit of theory we did in AP calculus,” she said. “I think my math teacher felt like nobody else was paying attention to that part of the class, so he really encouraged me.”

The encouragement continued through college, as her professors successfully guided her toward graduate school in mathematics instead of medicine. She earned both her master’s degree and Ph.D. in mathematics from the University of Chicago.

In 2009, Melnick joined UMD, drawn in part by a connection she made with UMD Mathematics Professor William Goldman. They met when Goldman gave a talk at the University of Chicago, and he invited Melnick to her first conference. She then spent the summer of 2006 in College Park collaborating with Goldman. The work resulted in a paper published in 2008 that was co-authored by Melnick, Goldman and three other researchers.

It was just the beginning of her research at UMD. She has now been here for more than a decade, and there’s little question she chose the right career path.

“As a mathematician today, one of my inspirations is the beauty of mathematics,” she said. “It is harmonious and sublime, and it is a great pleasure when my understanding falls into place and I can finally see it.”

When Melnick is not working out complex geometry in higher dimensional space, she enjoys swimming, cooking and exploring her creative side with her son.

“I’ve always dabbled in drawing and writing, and I’ve played instruments at various points,” she said. “But now that I have a child, that gives me an excuse to really spend some time doing more creative projects.”

And thanks in part to the fellowship, Melnick will have more time to focus her creative energies on the theoretical challenges that helped her fall in love with mathematics.