The Best of All Worlds

Elizabeth Corderman (B.S. ’94) lives her childhood dream of a career at NASA. 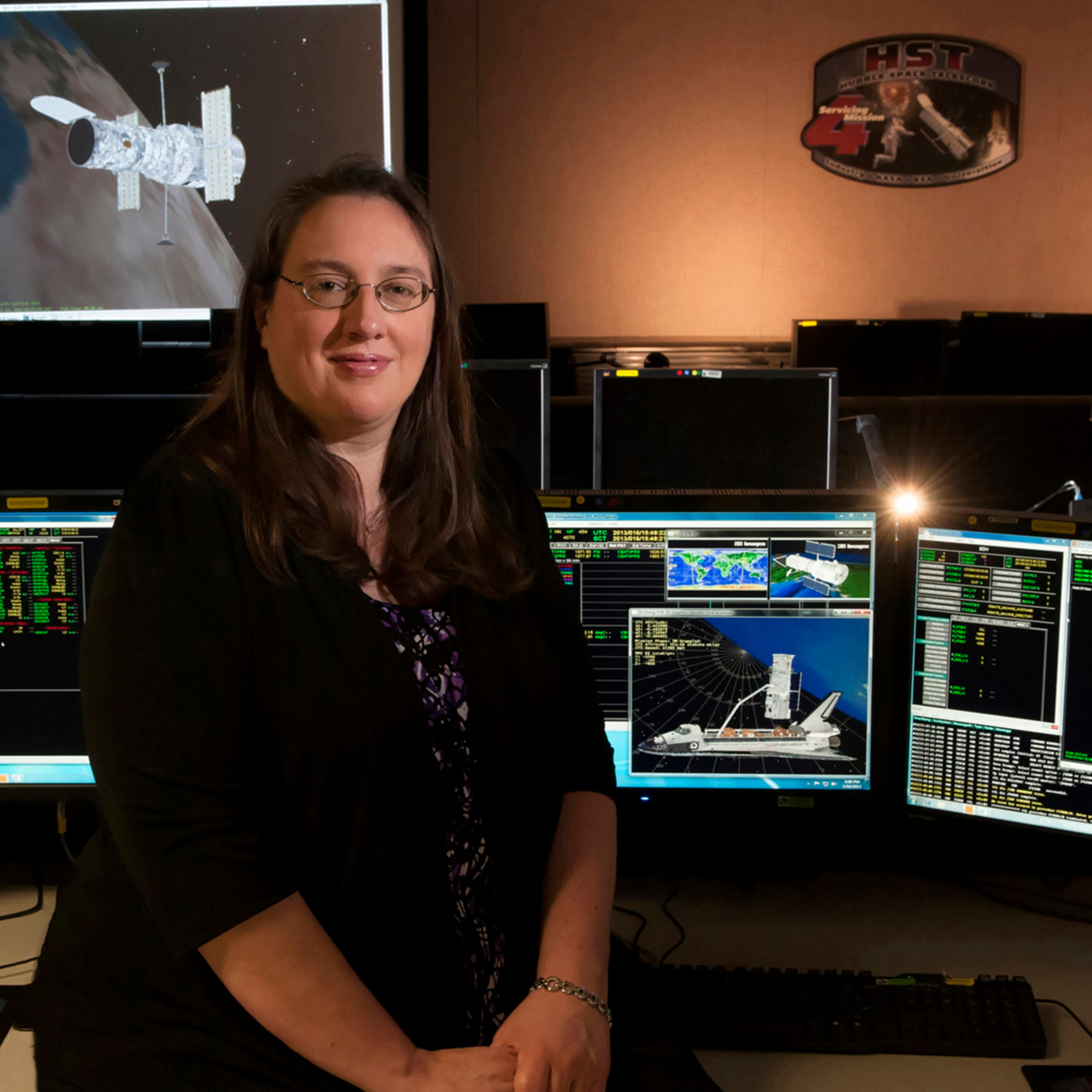 When Elizabeth Corderman (B.S. ’94, mathematics and computer science; M.S. ’99, computer science) was 12 years old, her fascination with space launched a big dream. And she was serious about making it happen.

“I’ve wanted to work at NASA all my life, and I always had enough sense to know that being an astronaut is a pie in the sky dream like being a movie star or a star athlete or something, obviously people get to do it but it’s very rare,” Corderman explained. “Then it dawned on me that for every astronaut in space, there’s all those people who do all the work on the ground supporting them and making sure they get home, and I was like, ‘I could do one of those jobs.’”

Fast forward 35 years and Corderman is living that dream and more. In her nearly 28-year career at NASA’s Goddard Space Flight Center she’s worked on everything from satellite missions and the Hubble Space Telescope program to her current job as deputy mission operations readiness manager for Landsat 9, an Earth-imaging satellite set to launch later this year.

“NASA is just a very rewarding place to work, it’s just, I love it,” she said.

Corderman grew up in Hagerstown, Maryland. A little on the quiet side, she was a good student and a bit of a geek, doing especially well in math and science.

Her father, John, a Hagerstown attorney who became a state senator and later a judge, encouraged her to work hard in school and keep working toward her NASA dream.

“I watched launches with my dad and that’s when I realized this could actually be a thing that I could do,” Corderman recalled. “It wasn’t so much that I was into math and science as it was that I wanted to work at NASA and what did I need to do to get there.”

In high school, she entered the annual school science fair and discovered that NASA was closer than she ever imagined—about 70 miles down the road in Greenbelt, Maryland.

“For the science fair you had to do a little project and I did something about space,” Corderman explained. “And representatives from NASA came and gave awards to everybody who did space-related stuff, and the prize was a tour of Goddard Space Flight Center in Greenbelt. I don’t even remember much about the tour, but it did make me realize NASA is here in Maryland, not just in Texas or Florida. And that was a big deal.”

When it was time to go to college, Corderman stayed close to home, enrolling at the University of Maryland. Looking back, she realizes it was inevitable.

Corderman entered Maryland as a math major and a Francis Scott Key Scholar. One of the people on the interview committee for that scholarship was John Gannon, a computer science professor who would become her mentor.

“He was teaching a section of one of the giant lecture hall intro classes and he was really formative,” Corderman explained. “I grew up in the ’80s. People were doing stuff with computers but I didn’t have a lot of experience. I felt intimidated by all these guys who’d been coding in their basements. And he was like, ‘You’re smarter than all of them. You just don’t have the experience. So, just stick it out and when you have the experience, you’re going to run circles around them.’”

The more Corderman worked with computers, the more she enjoyed it. So, as a sophomore, she took the plunge, taking on a second major in computer science. A year later, armed with a growing knowledge of software and programming—and memories of that science fair tour in high school—she applied and was accepted for a co-op work-study assignment at NASA’s Goddard Space Flight Center, which continued through her graduation in December 1994. From there, Corderman kept working at Goddard until she went back to Maryland to get her master’s degree in computer science, again, with her college mentor supporting her every step of the way.

Two words that changed everything

When Corderman got her graduate degree, she was still working at NASA, writing software for the Earth Observing System, an ongoing series of satellite missions for global observation of the Earth’s surface.

“The first three missions I worked were Terra, Aqua and Aura,” Corderman said. “The satellites, they’re all still up there, which is kind of crazy.”

Corderman was working on the Terra mission when one of the pieces of software she wrote was declared “launch critical”—two words that changed everything.

“What it meant was I got to sit in the control room. My job was to sit behind the guy who was using my software, in case there was a problem,” Corderman explained. “At NASA we like to practice a lot, so there were all these mission simulations going on where they kind of pretend it was launching. They’d have a big piece of hardware that simulates the spacecraft and feeds telemetry to the ground, and they’d put these anomalies in to test people and all the loops were going and people were saying go and it was the coolest thing I’d ever seen. This is why I wanted to come to NASA.”

Mechanic for the mission

For the Aqua and Aura missions, Corderman took on a management role and then kept moving up from there. By 2009, she was working on the Hubble program as senior ground system engineer, a “mechanic” for the mission.

“I’m a mechanic, someone who takes care of the bus, no matter what the payload is. Some buses have people in them, some buses have equipment on them,” she explained. “My job kind of stays the same whether it’s a communications satellite or a science satellite or even a manned vehicle.”

Deployed by space shuttle Discovery in 1990, Hubble was the first major optical telescope to be placed in space and has made more than 1.4 million observations over the course of its lifetime. Working on Hubble gave Corderman a ringside seat for a chapter in space history.

“The heritage of it was just amazing,” Corderman observed. “There’s all these interesting little details because it’s so old. Most satellites have what we call a solid-state recorder on them. It’s basically a giant flash drive to hold the data when it’s recorded before it’s communicated to the ground. Hubble had a tape drive when it first launched, it was magnetic tape and a reel to reel and at the time I was like, ‘No way!’”

Corderman stayed with Hubble until late 2013 when she moved on to the Joint Polar Satellite System (JPSS), a NASA/National Oceanic and Atmospheric Administration program that uses U.S. polar-orbiting satellites to provide data for weather forecasting and climate monitoring. As the command, control and communications (C3S) lead, Corderman made sure antennas, data systems, hardware and software at the control center were ready for the 2017 launch of J1, the first of four planned JPSS satellites.

Planning for missions, launching satellites—it’s the stuff Corderman used to dream about. She still gets geeked just thinking about it.

“It’s just so amazing when we’re launching,” Corderman explained. “The whole business with telemetry where I can look at a screen and realize that’s happening up there and I can see it down here, I just think that’s really cool. It just amazes me that we can do that.”

Corderman now works as deputy mission operations readiness manager for Landsat 9, a NASA partnership with the U.S. Geological Survey. Her job is to run the ground system and help prepare the operations team for the September 2021 launch of the ninth satellite in the Landsat series, which aims to monitor, understand and manage the land resources needed to sustain human life.  Not long after she joined Landsat in 2019, Corderman had one of her coolest space experiences ever—a satellite communications test.

“I spent three weeks out at the spacecraft vendor doing this test with the satellite and I got to go to the clean room,” Corderman recalled. “I’d never been in a clean room before in my life and I was just geeking out big time. I was scared to cough; I had like 14 things all covering me and my hair was dyed purple at the time and I was sure they were going to find purple hair in the clean room and I was going to get in trouble. I was really just fascinated by the whole thing, you know, how you build a satellite.”

What’s next for Corderman after Landsat 9 launches this fall? She isn’t sure, but she knows whatever it is, she’ll be at NASA. After nearly three decades, the work is still everything her 12- year-old self hoped it would be.

“It’s just, I love it,” Corderman explained. “We’re so mission focused. Most of the people I work with are so committed to the mission, what’s the best thing for the mission. That’s just really rewarding.”

And it’s not just the work. Corderman appreciates that the job she loves also keeps her close to the people who are most important in her life—Terp classmates who have become lifelong friends and, most of all, her family.

“I’m really close to my family,” she explained. “My dad passed away in 2012, and my mom and I were always close. We’re extra close now. And my two brothers—one’s in Hagerstown and one’s in Fairfax. Between the two of them they’ve got four kids and I don’t have any kids of my own, so I love being an aunt, it’s just the best thing. I’m really blessed.”

Corderman is living the life she grew up dreaming about and worked hard to achieve—pursuing a challenging career at NASA that let her reach for the stars yet stay close to home. For her, it’s the best of all worlds.