How Lee Mendelowitz (M.S. ’12, Ph.D. ’15) stepped up to the plate to become the director of baseball research for the Washington Nationals. 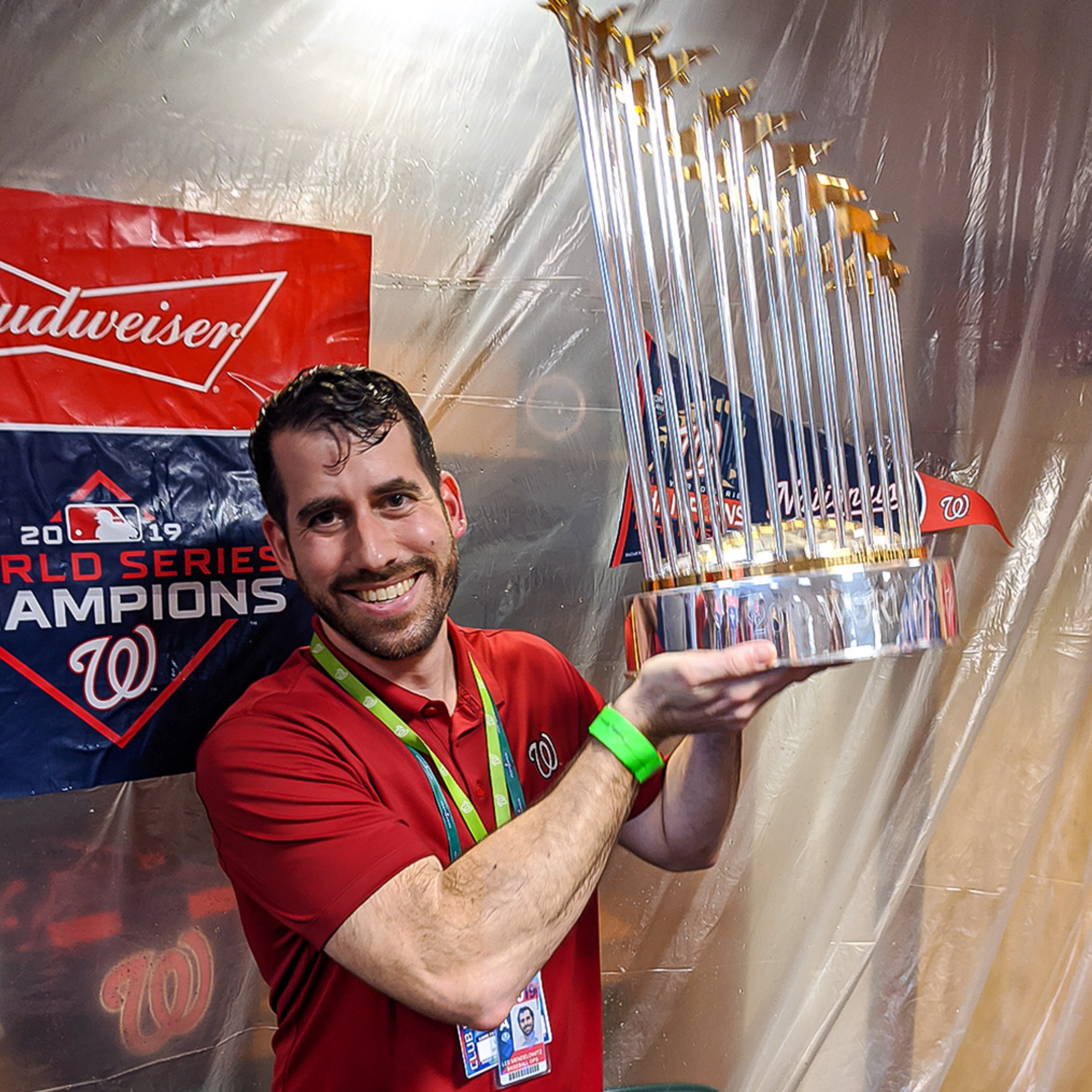 Lee Mendelowitz has had a passion for Major League Baseball since he was a kid. But now when he watches a game, he’s looking for a lot more than runs, hits and errors.

“I used to just watch the game. Now it feels like I’m watching the game within the game,” he said. “There are just so many more details to pay attention to.”

Mendelowitz isn’t just any baseball fan, though, he’s the director of baseball research for the Washington Nationals. And with both a master’s and a Ph.D. from the University of Maryland’s applied mathematics & statistics, and scientific computation (AMSC) program, he understands the value of every little detail. Whether it’s the speed and trajectory of a pitch, the positioning of players on the field or even the parameters of a particular umpire’s strike zone, Mendelowitz’s job is all about crunching the numbers to help his team win.

Growing up a Yankees fan

Mendelowitz grew up in Bergen County, New Jersey, rooting for the Yankees and going to games with his dad and his brothers.

“I have a distinct memory of 1996,” he recalled. “I was 10 years old and that was Derek Jeter’s rookie year, and the team went on to win the World Series. And that was the year I really became a Yankees fan and a baseball fan. We went to plenty of Yankees games and that was a big part of my upbringing.”

At school, mathematics and science came easily to Mendelowitz, and they quickly became his favorite subjects.

From math and physics to computer science, Mendelowitz saw his interests coming together through high school. In 2004, he went to Cornell University, where he earned his undergraduate degree in applied physics. Then, in 2008, he accepted an entry-level systems engineering position at Raytheon Technologies in Massachusetts.

“I was working as a software engineer in the modeling and simulation group,” Mendelowitz said. “We’d write software to model different situations with this Navy project we were working on, which was kind of interesting.”

But he couldn’t stop thinking about an applied math course that captured his interest while he was at Cornell.

“It was a nonlinear dynamics course taught by Professor Steve Strogatz,” Mendelowitz recalled. “It was all about mathematical modeling with differential equations and complex behaviors that can arise from simple sets of equations. I found that fascinating. And I felt a calling—I wanted to go back to school and pursue applied math.”

Mendelowitz and his then-girlfriend, now wife, Diana Cohn, decided to coordinate their search for graduate schools, and the D.C. area was on the list. While she looked at law schools, he applied to the AMSC program at UMD.

“The thing I really liked about the program was the flexibility it offered and the broad scope of applied math research going on at AMSC,” Mendelowitz said. “I really hadn’t made up my mind at this point about what I wanted to pursue for graduate research other than that I knew I wanted it to involve math and programming.”

Mendelowitz earned his master’s degree in 2012 and stayed at Maryland for his Ph.D. It was during that time, in 2013, that he developed an interest in a general-purpose programming language called Python. And just for fun, he used it to launch an ambitious side project: tracking escalator breakdowns in the D.C. Metro system. He called it DC Metro Metrics.

“The initial idea I had was to build this Twitter bot that would tweet every time that an escalator stopped working in the D.C. Metrorail system,” Mendelowitz explained. “I was living in D.C., so I was taking Metro to commute every day back and forth to College Park. When you’re commuting, it‘s especially annoying when escalators don’t work and you have to walk up three stories. So, I thought this would be fun and no one else had done anything like it.”

Due to popular demand, he added elevator outages and other information to the escalator breakdowns, posting it all on a website—dcmetrometrics.com. Interest from the public and the press just kept growing.

“We were getting hundreds of page views a day,” Mendelowitz said. “And I did get a lot of emails, too. Some people really relied on it, which kind of surprised me—people who had disabilities who were trying to navigate the Metro system were looking at my website to view the latest outages instead of using the website that Metro provided. It was a fun learning experience because it was the first time that I’d deployed code to the cloud and made use of a database system.”

He kept dcmetrometrics.com up and running for several years until he no longer had the time or energy to maintain it.

Bringing baseball back into focus

Meanwhile, Mendelowitz moved ahead with his Ph.D., researching software algorithms that work with a particular type of genomic mapping data. He planned to continue his research through the summer of 2014, until he attended a D.C. data science meetup that unexpectedly brought baseball back into focus. During the meetup, Sam Mondry-Cohen, now assistant general manager of baseball R&D with the Washington Nationals, announced an internship opportunity with the team that just happened to fit Mendelowitz’s applied mathematics and data science skillset. He applied and ended up getting the job.

“I remember I had to be talked into the internship a little bit,” he admitted. “I was on the fence because I was concerned about whether it would be a good decision for my professional development. Here I am trying to wrap up my Ph.D. and I take two-and-a-half or three months off to work in baseball, is that going to set me back in my Ph.D. work? I really was not sure, but the experience ended up being incredible.”

For Mendelowitz, it was an opportunity to look at baseball in ways he never had before—using what he’d learned to see the game from the inside.

“I worked on a project where I was modeling the strike zone of each umpire,” Mendelowitz recalled. “For each umpire it’s slightly different—some are friendlier to the pitchers where they call more strikes, some are friendlier to hitters where they call less strikes, but going even further than that, each umpire has a slightly different shape to their strike zone. Given the location of each pitch and who the umpire was, we can then start to model, using predictive models, what each umpire’s strike zone looks like. It was a great learning experience.”

After the internship ended, Mendelowitz stayed with the Nationals as a consultant and after completing his Ph.D. in 2015, he went to work for the team full time as an analyst. By this time, the Nationals and other major league teams had more data to work with than ever before thanks to StatCast, MLB’s player tracking system.

“Now we know where the ball is at all times, we know how players are positioned and moving on the field, so if there’s a line drive to center field and a player has to make a very athletic play to make the catch, we have all these metrics on that play,” he explained. “We know how hard the ball was hit, and in what direction, we know how far the ball traveled, we know how quickly the center fielder reacted and the route he took to try to make the play. The ultimate goal is to use this kind of information to make decisions that translate to wins on the field.”

“I’m still not sure how it happened”

For Mendelowitz, being part of the Nationals’ day-to-day operations is an experience beyond anything he could have imagined—working at the ballpark, going to games and contributing to the success of the team all year-round. Though he always loved baseball, he never considered the possibility of a job in the major leagues until it was right in front of him.

“The truth is no, I really did not ever consider a career in baseball,” he admitted. “I didn’t think, ‘Oh, I want to work in baseball.’ I just thought I’m going to continue being a baseball fan and I’m going to work in data science R&D somewhere else. I didn’t realize that teams were really hiring in this area. And even if they were, there are only 30 teams and I didn’t even know how many jobs would be available. I’m still not sure how it happened, but I’m glad it did.”

Now, after five years with the Nationals—including the thrill of being part of the team’s World Series win in 2019—he is hard pressed to think of a job that would be a better fit. It may not be a career path he expected, but to this lifelong baseball fan, it feels like a home run.

“I feel really lucky. I remember just the randomness of how this all came together,” he said. “I was lucky to get the internship, lucky to get a full-time offer and the Nationals deciding there’s a role for people like me to work in baseball. It’s really a blessing. I feel very fortunate and grateful, that’s for sure.”