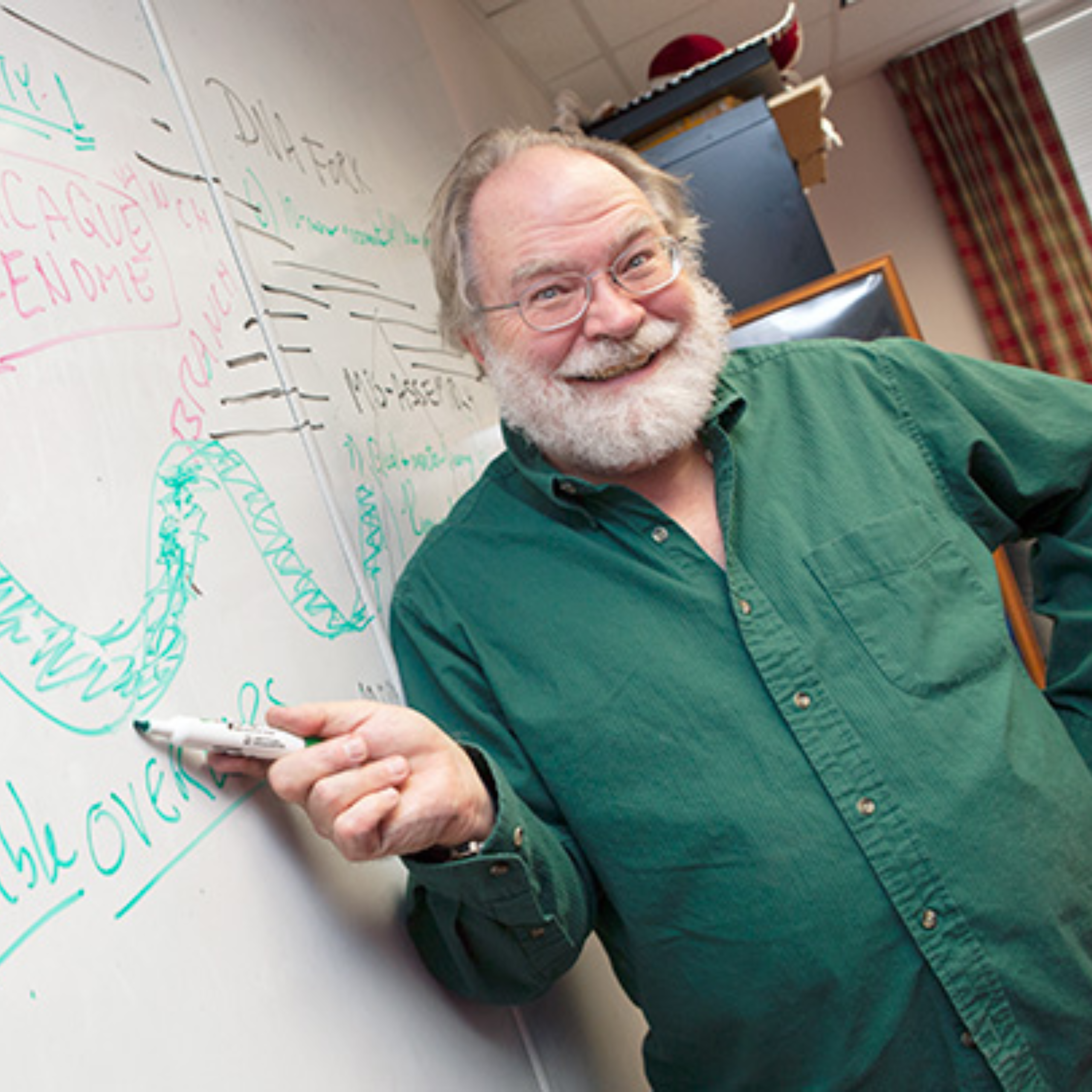 James “Jim” Yorke has held many titles during his career as a mathematician at the University of Maryland—from Ph.D. student to Distinguished University Professor—but he prefers just one: coach.

“A coach is supposed to help you excel, but I don't know what a professor is supposed to do, profess?” said Yorke (Ph.D. ’66, mathematics). “If I want facts, I can get them from books.”

Yorke wasn’t being snarky. He was posing a challenge to see things differently, more deeply—the way he always has throughout his nearly 60-year career.

“I still think of him as Coach,” said Laura Tedeschini-Lalli (Ph.D. ’86, applied mathematics), a professor of mathematics at Roma Tre University in Rome, Italy, who was one of Yorke’s students. “He used to tell us, ‘A teacher can teach you part of what he knows and that’s about it, but a coach helps you excel at what you do well.’ And really, he goes beyond teaching about math. He gets to know people, and through his humanity he helps people excel as mathematicians, but also as better human beings.”

That sentiment was echoed over and over as more than 100 of Yorke’s colleagues, friends and former students celebrated his 80th birthday on September 18, 2021. The celebration, held virtually on Zoom, included six scientific talks and two hours of toasts.

During his toast, S. James Gates Jr.—a College Park Professor of Physics, National Medal of Science awardee and the current president of the American Physical Society—called Yorke the closest thing to a Renaissance man he had ever met and said he appreciated “opportunities to follow such a broadly intellectual and forceful personality.”

DJ Patil (M.A. ’99, Ph.D. ’01, applied mathematics), one of Yorke’s graduate students who went on to serve as the first U.S. chief data scientist, said Yorke helped set the tenor for the open, creative culture that taught him what a collaborative environment should be.

Equally impressive was the number of younger scientists who said Yorke made them feel valued and at home, including high school student Ishan Saha, who reached out to Yorke last year with questions about chaos. Saha chimed in to raise a water-filled glass to the famed mathematician who generously met with him weekly to talk about math and science.

Wayne Hayes, a former postdoctoral associate who is now an associate professor in the Donald Bren School of Information and Computer Sciences at UC Irvine, joined the celebration while on a motorcycle trip. He tipped his helmet to Yorke and reminisced about his first few days at UMD when Yorke lent him cash to pay rent because he was unable to access his Canadian bank account.

Yorke’s humanity and generosity made an impact on students and colleagues far and wide, and although he has published more than 300 papers, his priority has always been connecting with the people around him.

“I like to work with people,” he said. “I haven’t had a single-author paper since 1970-something. You bring in more people and you end up with better papers.”

Nor has he stayed in his lane as a mathematician. Over his career, Yorke’s co-authors have hailed from fields as diverse as epidemiology, meteorology, ecology and artificial intelligence. The six invited speakers at his celebration presented recent research they collaborated on with Yorke that spanned topics ranging from laying the groundwork for ensemble weather prediction models to simplifying methods for reconstructing the largest genome ever assembled (eight times larger than the human genome) to understanding species interactions and research on artificial intelligence.

Yorke’s ability to contribute to such a broad range of disciplines comes from his unique ability to cut to the core of what matters.

Seeing Through the Chaos

Yorke came to UMD in 1963 as a graduate student after earning his bachelor’s degree in mathematics from Columbia University. He was attracted to the interdisciplinary work at the Institute for Fluid Dynamics and Applied Mathematics (IFDAM), which is now known as the Institute for Physical Science and Technology (IPST). He earned his Ph.D. in mathematics in 1966 and joined IFDAM as a faculty member.

When Yorke began his career, mathematicians and scientists tended to think that all physical phenomena were predictable and cases that defied prediction were merely examples of flawed experiments. The idea that dynamical systems can be both guided by precise rules and yet remain unpredictable in the long run (such as weather, which is governed by the laws of physics), seemed to stand only in isolated situations.

In the early 1970s, a colleague gave Yorke a copy of a 1963 paper from the Journal of the Atmospheric Sciences that would lay the foundation for the rest of his career. The paper, by American mathematician and meteorologist Edward Norton Lorenz, focused on mathematical methods used in numerical weather forecast models. It derived three differential equations from a complicated atmospheric circulation system and showed how small changes to data fed into the equations could result in considerably different outcomes. It was a very narrowly focused paper that didn’t initially rattle scientific cages, but Yorke recognized that Lorenz’s equations described a phenomenon that was applicable to all complex, dynamical systems.

“Lorenz’s 1963 paper was very insightful, but he hadn’t related it to the broader world,” Yorke said. “It didn't lead anybody to say, ‘Oh, maybe that's what's happening here.’ What I did was explain and generalize the phenomena that Lorenz’s paper described.”

Yorke also gave the phenomenon a name: chaos. In 1975, Yorke and his graduate student Tien-Yien Li published the explanation in an article titled “Period Three Implies Chaos,” in the journal American Mathematical Monthly.

Suddenly, there was a scientific principle to describe how a dynamic system could be so sensitive to small, random perturbations as to be unpredictable, and it opened the gates for scientists and mathematicians to investigate randomness and instability in everything from weather and fluid dynamics to financial markets and the spread of disease.

“The last people to know about chaos were the scientists,” Yorke said. “Because we all know how small things can have a big effect on our lives.”

Chaos became a new branch of science well suited to exploiting the emergence of personal computers and might have evolved in a completely different direction or never come about at all if Yorke’s colleague had never handed him that paper by Lorenz. Or if Yorke had not seen the bigger picture in Lorenz’s work.

“I am pretty good as a mathematical problem-solver, but there are much better problem-solvers,” Yorke explained. “I see connections between things which don't look connected to other people until after the fact, and then, they seem obvious.”

Yorke has been recognized for his work at the highest levels. In 1995, he was named Distinguished University Professor, the highest academic honor bestowed by UMD. In 2003, he was awarded the Japan Prize for finding universality in complex systems such as chaos and fractals. The Japan Prize, administered by the Emperor of Japan, carries nearly the prestige of the Fields Medal and the Nobel Prize. And in 2013, he was awarded the UMD President’s Medal.

That same year, the rotunda of the Mathematics building (now called William E. Kirwan Hall) was named for Yorke in commemoration of his 50 years of scholarship and service to the university. The plaque memorializing the dedication includes a few quotes that summarize Yorke’s philosophy on life and mathematics, including one that was referenced more than once during his 80th birthday celebration: “A degree in mathematics is a license to explore the universe.”

Curiosity as a Driving Force

It was an exploration of the universe that first drew Yorke to science. In the fourth grade, on a trip to the Hayden Planetarium in New York City, he fell in love with the solar system. It was the imagery of the planets that captivated him at first, perhaps spurred by his budding interest in photography. (Yorke’s father had a darkroom at that time, and Yorke’s passion for photography has carried on, with photographs he took hanging in the lower level of Kirwan Hall.)

The beauty of those solar system images at the planetarium also inspired Yorke to read about astronomy, which led to an interest in physics and mathematics. In college, Yorke discovered he wasn’t excited by lab experiments or finding solutions to problems. He wanted to look at problems in new ways, to take an alternative approach that made the solutions seem more obvious.

Perhaps just as central to Yorke’s success is his drive to root mathematics and physics in the tangible world and to apply his unique vision in areas that resonate with people outside of math and physics.

“My goal is not to make discoveries that only the five smartest people in the world will understand,” Yorke said. “My goal is to tell physicists how to think about mathematics. I’m interested in examples that people can understand, and I’m always asking, ‘Can you come up with research that will surprise people?’”

Call it curiosity or wonder, but even now the element of surprise seems to light a visible spark in Yorke’s eyes when he speaks. It’s as if he’s perpetually challenging the world to throw something new at him.

As he said during his 80th birthday celebration, “The question is always, ‘What do we do next?’”