The AWM Distinguished Colloquium series is being established in Spring 2021 in celebration of the 50th anniversary of the founding of the Association for Women in Mathematics. The series will comprise three colloquium talks this spring and will continue thereafter with one colloquium per semester. 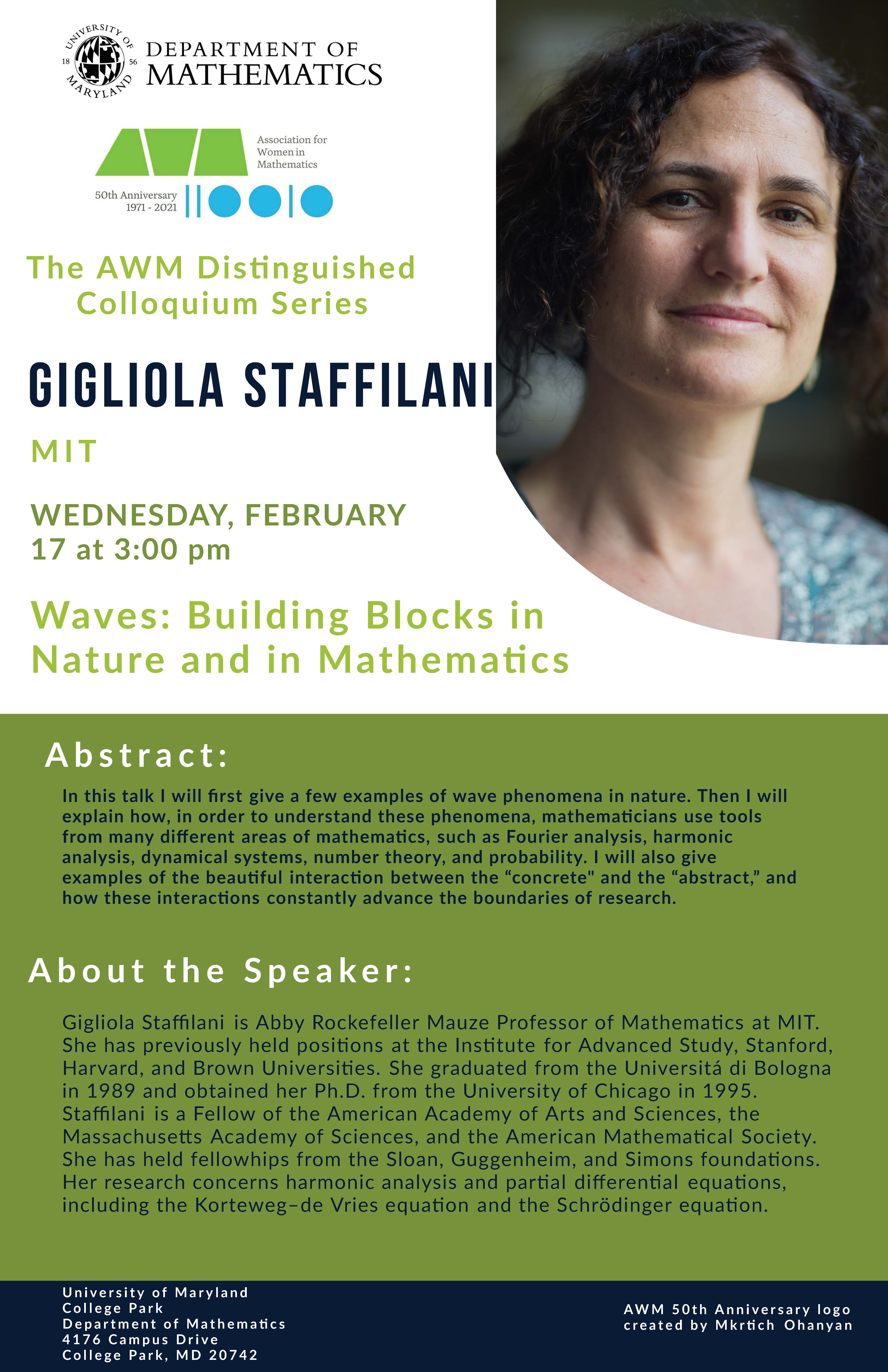 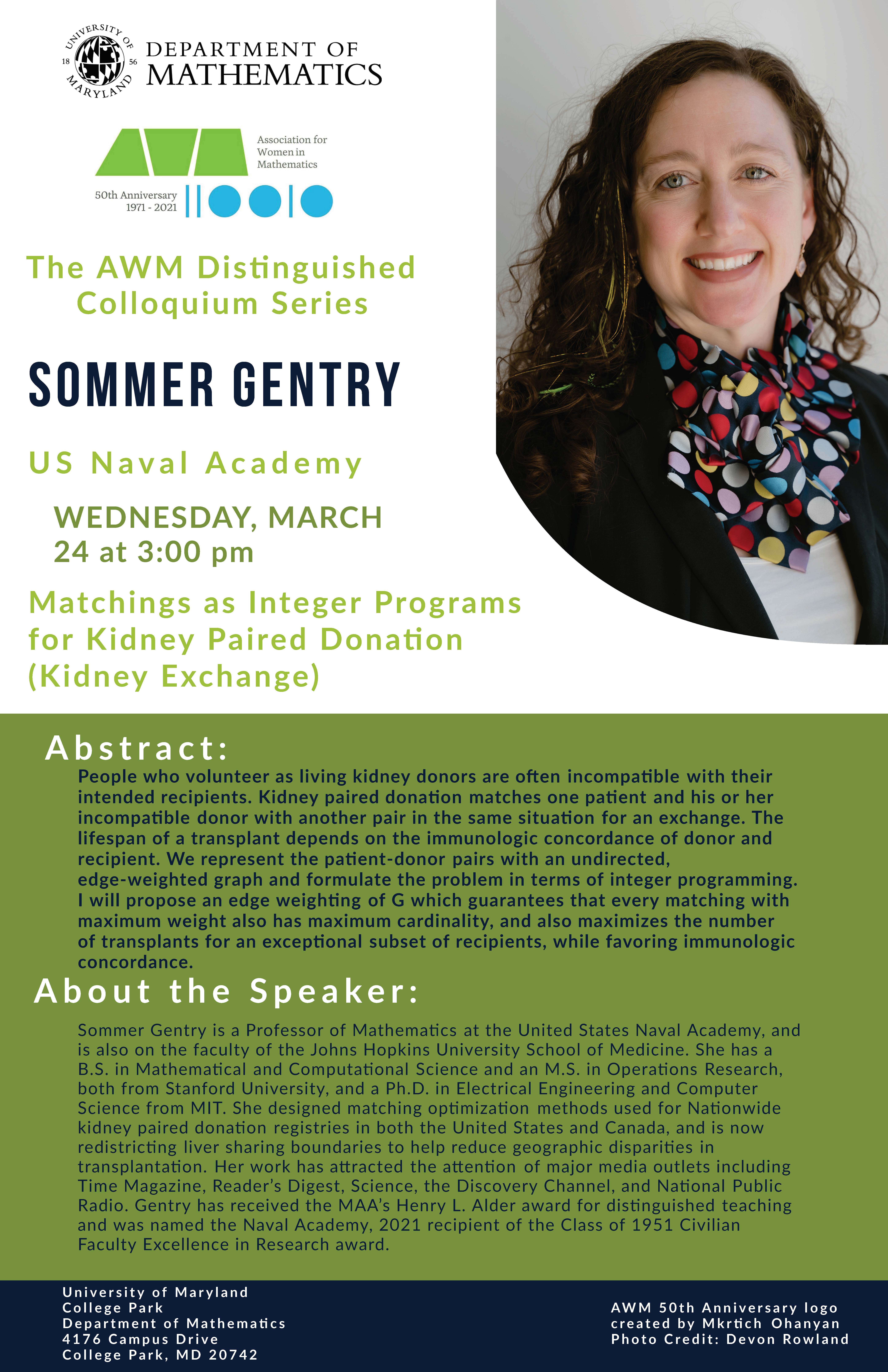 Click To ZoomSpeaker: Sommer Gentry (US Naval Academy)
When: Wednesday, March 24, 2021 at 3:00 p.m.
Where: Online Zoom
Abstract:  People who volunteer as living kidney donors are often incompatible with their intended recipients. Kidney paired donation matches one patient and his or her incompatible donor with another pair in the same situation for an exchange. The lifespan of a transplant depends on the immunologic concordance of donor and recipient. We represent the patient-donor pairs with an undirected, edge-weighted graph and formulate the problem in terms of integer programming. I will propose an edge weighting of G which guarantees that every matching with maximum weight also has maximum cardinality, and also maximizes the number of transplants for an exceptional subset of recipients, while favoring immunologic concordance.

Sommer Gentry is a Professor of Mathematics at the United States Naval Academy, and is also on the faculty of the Johns Hopkins University School of Medicine. She has a B.S. in Mathematical and Computational Science and an M.S. in Operations Research, both from Stanford University, and a Ph.D. in Electrical Engineering and Computer Science from MIT. She designed matching optimization methods used for nationwide kidney paired donation registries in both the United States and Canada, and is now redistricting liver sharing boundaries to help reduce geographic disparities in transplantation. Her work has attracted the attention of major media outlets including Time Magazine, Reader’s Digest, Science, the Discovery Channel, and National Public Radio. Gentry has received the MAA’s Henry L. Alder award for distinguished teaching and was named the Naval Academy’s 2021 recipient of the Class of 1951 Civilian Faculty Excellence in Research award. Suppose you have a group of transformations of a space. If you know something about individual transformations, can you extrapolate to say something global about the whole system? The paradigm example of this is an old theorem of Hölder: if you have a group of homeomorphisms of the real line and none of them fixes a point, then the group is abelian and the whole system is conjugate to an action by translations. My talk will be an illustrated introduction to this family of problems, including some recent joint work with Thomas Barthelmé that gives a new such result about groups acting on the line. As an application, we use this to prove rigidity results for a different, fascinating family of dynamical systems, Anosov flows in dimension 3.

Kathryn Mann is an Assistant Professor of Mathematics at Cornell University. She has previously held positions at UC Berkeley and Brown University. She graduated from the University of Toronto in 2008 with degrees in Mathematics and Philosopy and obtained her Ph.D. from the University of Chicago in 2014. Her research has been recognized with the Mary Ellen Rudin Young Researcher Award, the AWM's Joan and Joseph Birman Research Prize in Geometry and Topology, and the Wroclaw Mathematical Foundation's Kamil Duszenko Award. She has held a CAREER grant from the NSF and a Sloan Fellowship. She studies fundamental questions about groups actions on manifolds, including rigidity of homeomorphism and diffeomorphism groups of manifolds. 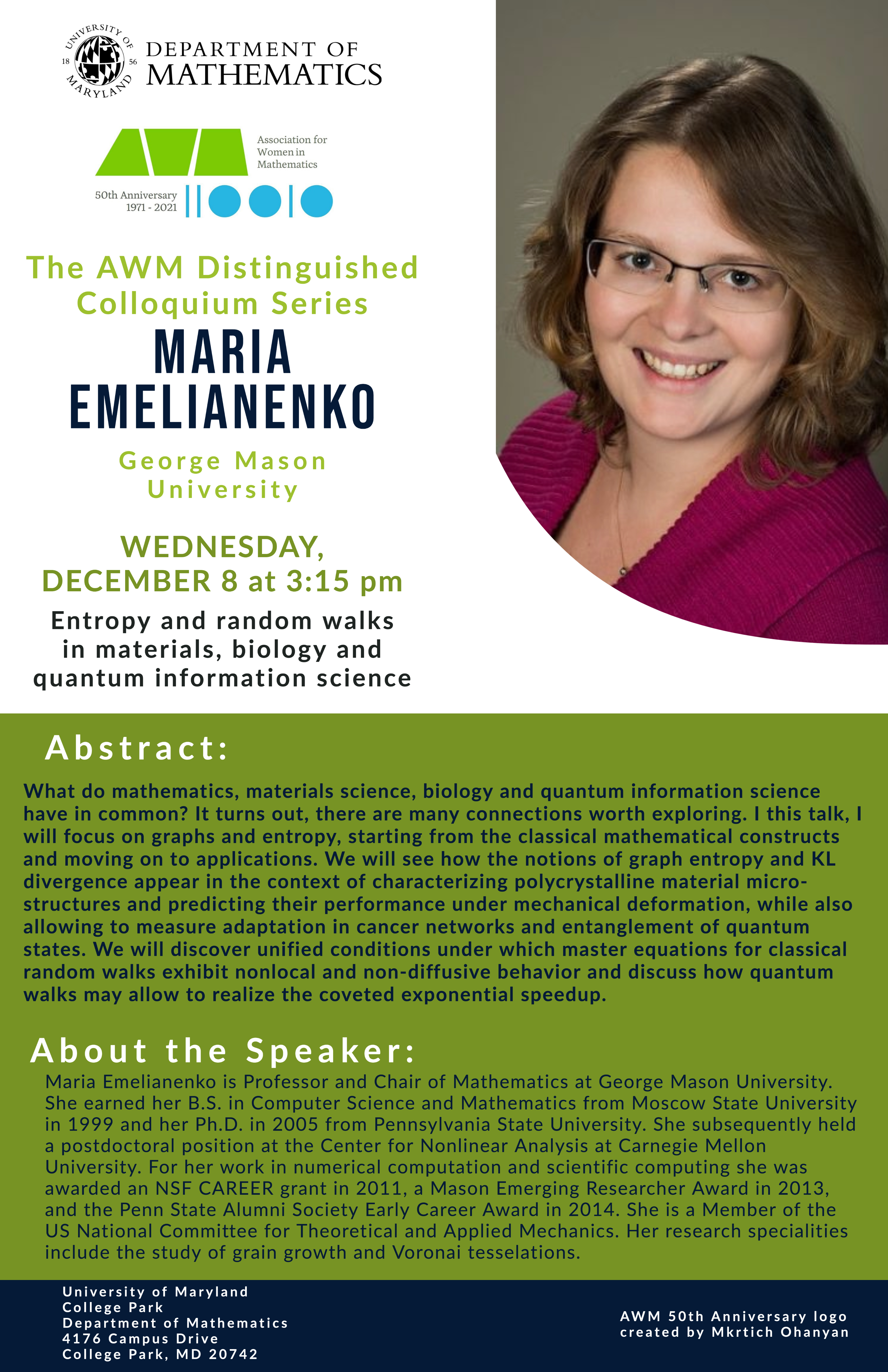 What do mathematics, materials science, biology and quantum information science have in common?  It turns out there are many connections worth exploring.  In this talk, I will focus on graphs and entropy, starting from the classical mathematical constructs and moving on to applications. We will see how the notions of graph entropy and KL divergence appear in the context of characterizing polycrystalline material microstructures and predicting their performance under mechanical deformation, while also allowing to measure adaptation in cancer networks and entanglement of quantum states. We will discover unified conditions under which master equations for classical random walks exhibit nonlocal and non-diffusive behavior and discuss how quantum walks may allow to realize the coveted exponential speedup.

Maria Emelianenko is Professor and Chair of Mathematics at George Mason University. She earned her B.S. in Computer Science and Mathematics from Moscow State University in 1999 and her Ph.D. in 2005 from Pennsylvania State University. She subsequently held a postdoctoral position at the Center for Nonlinear Analysis at Carnegie Mellon University.  For her work in numerical computation and scientific computing, she was awarded an NSF CAREER grant in 2011, a Mason Emerging Researcher Award in 2013, and the Penn State Alumni Society Early Career Award in 2014.  She is a member of the US National Committee for Theoretical and Applied Mechanics. Her research specialties include the study of grain growth and Voronai tesselations. 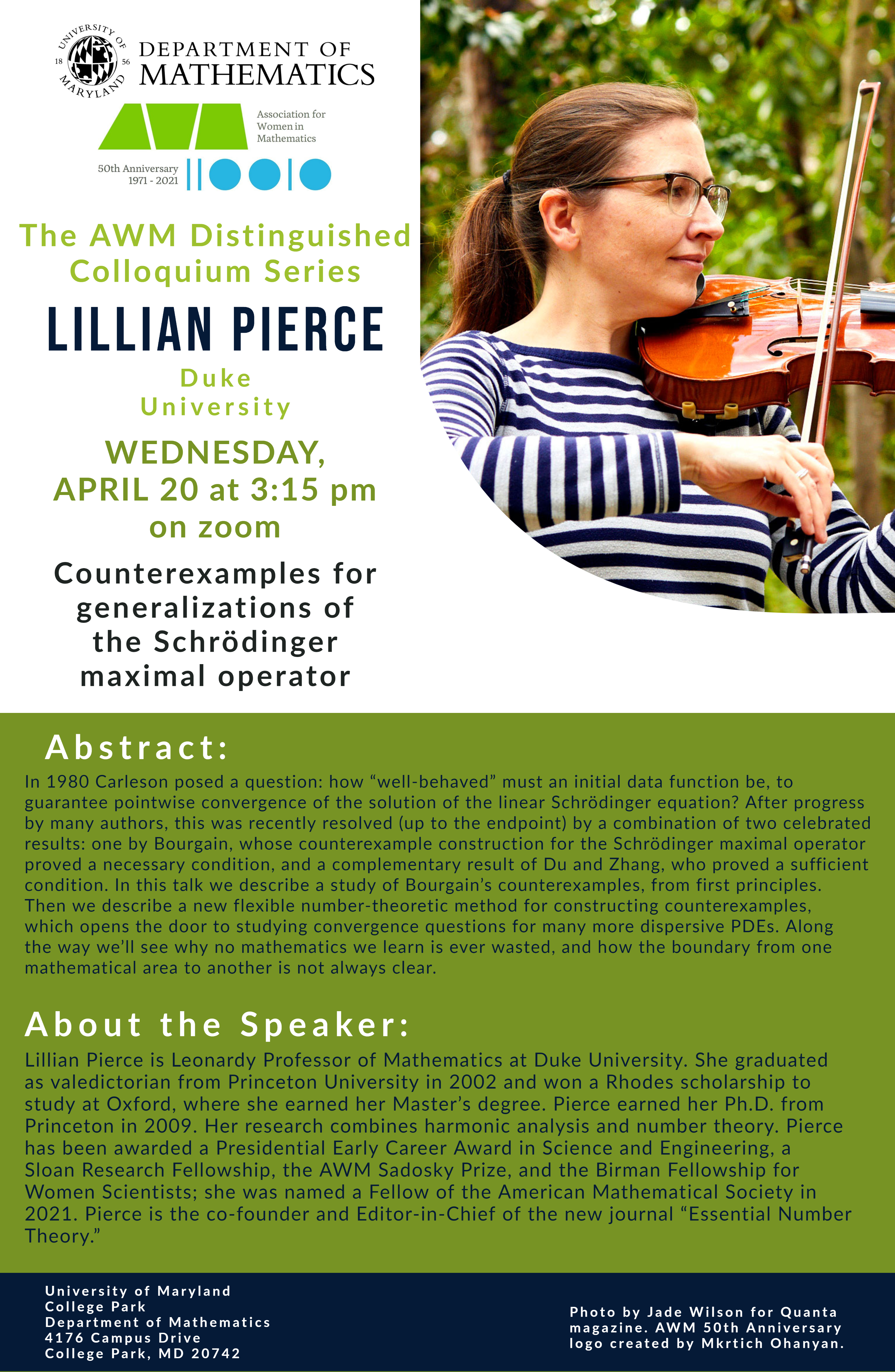 In 1980 Carleson posed a question: how “well-behaved” must an initial data function be, to guarantee pointwise convergence of the solution of the linear Schrödinger equation? After progress by many authors, this was recently resolved (up to the endpoint) by a combination of two celebrated results: one by Bourgain, whose counterexample construction for the Schrödinger maximal operator proved a necessary condition, and a complementary result of Du and Zhang, who proved a sufficient condition. In this talk we describe a study of Bourgain’s counterexamples, from first principles. Then we describe a new flexible number-theoretic method for constructing counterexamples, which opens the door to studying convergence questions for many more dispersive PDE’s. Along the way we’ll see why no mathematics we learn is ever wasted, and how the boundary from one mathematical area to another is not always clear.

Lillian Pierce is Leonardy Professor of Mathematics at Duke University. She graduated as valedictorian from Princeton University in 2002 and won a Rhodes scholarship to study at Oxford, where she earned her Master’s degree. Pierce earned her Ph.D. from Princeton in 2009. Her research combines harmonic analysis and number theory. Pierce has been awarded a Presidential Early Career Award in Science and Engineering, a Sloan Research Fellowship, the AWM Sadosky Prize, and the Birman Fellowship for Women Scientists; she was named a Fellow of the American Mathematical Society in 2021. Pierce is the co-founder and Editor-in-Chief of the new journal “Essential Number Theory.” 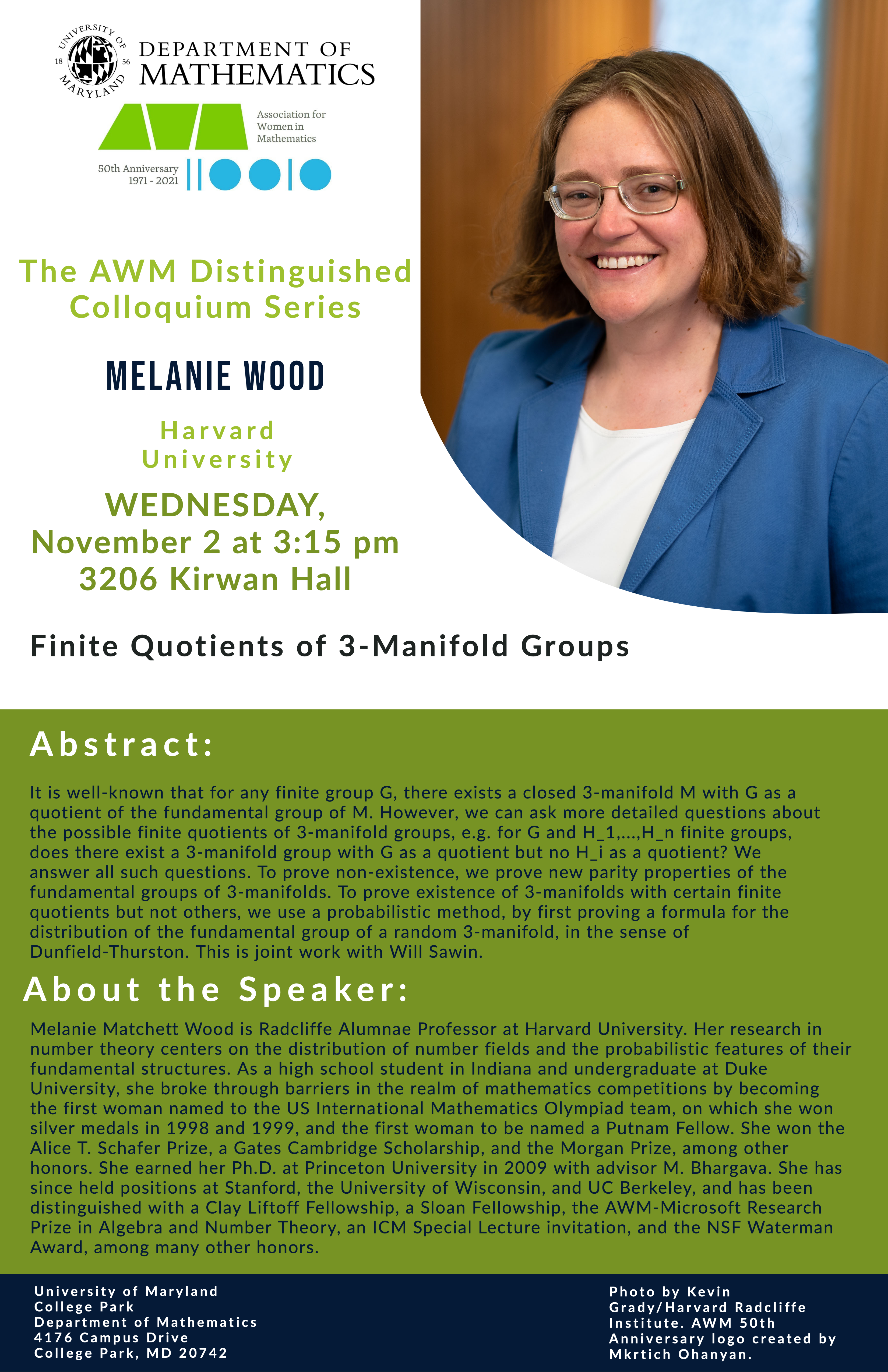 Melanie Matchett Wood is Radcliffe Alumnae Professor at Harvard University.  Her research in number theory centers on the distribution of number fields and the probabilistic features of their fundamental structures.  As a high school student in Indiana and undergraduate at Duke University, she broke through barriers in the realm of mathematics competitions by becoming the first woman named to the US International Mathematics Olympiad team, on which she won silver medals in 1998 and 1999, and the first woman to be named a Putnam Fellow.  She won the Alice T. Schafer Prize, a Gates Cambridge Scholarship, and the Morgan Prize, among other honors.  She earned her Ph.D. at Princeton University in 2009 with advsior M. Bhargava.  She has since held positions at Stanford, the University of Wisconsin, and UC Berkeley, and has been distinguished with a Clay Liftoff Fellowship, a Sloan Fellowship, the AWM-Microsoft Research Prize in Algebra and Number Theory, an ICM Special Lecture invitation, and the NSF Waterman Award, among many other honors