Over the last decade, UMD’s nominations yielded 33 scholarships—the most in the nation 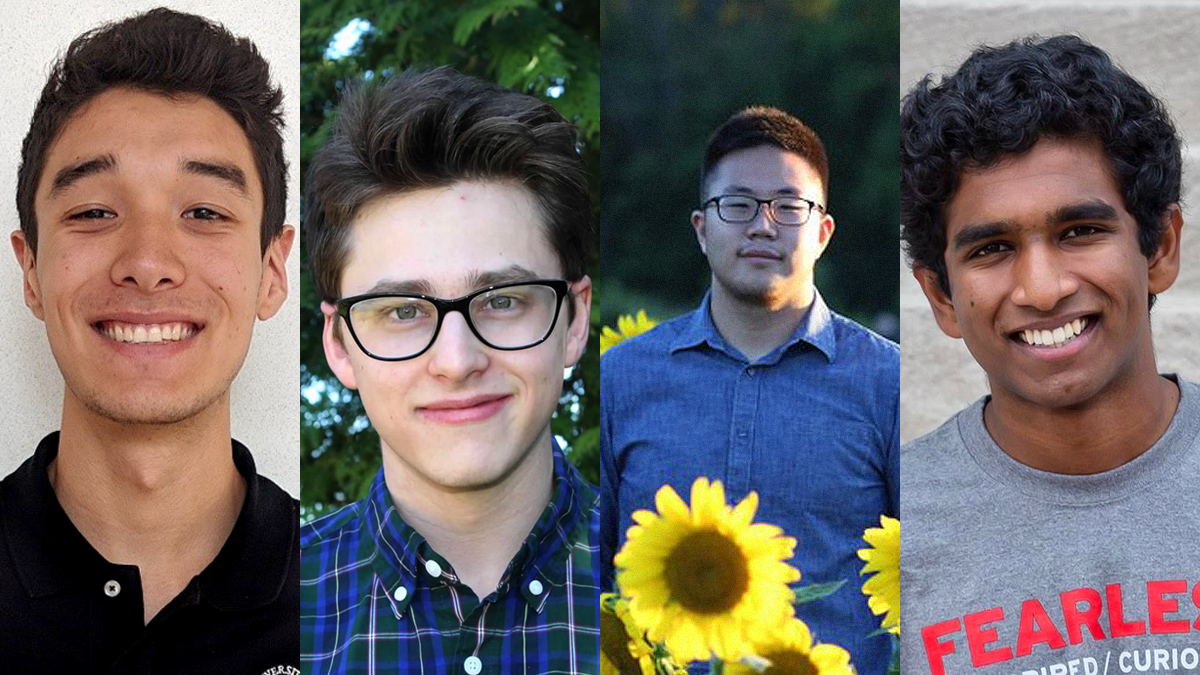 For the third year in a row, the University of Maryland’s four undergraduate nominees have been awarded scholarships by the Barry Goldwater Scholarship and Excellence in Education Foundation, which encourages students to pursue advanced study and research careers in the sciences, engineering and mathematics.

Over the last decade, UMD’s nominations yielded 33 scholarships—the most in the nation, followed by Stanford University with 32. Harvard University, the Massachusetts Institute of Technology and Johns Hopkins University also rank in the top 10.

Matthews, Moroch, Oh and Ravindra were among the 396 Barry Goldwater Scholars selected from 1,343 students nominated nationally this year. Goldwater Scholars receive one- or two-year scholarships that cover the cost of tuition, fees, books, and room and board up to $7,500 per year. These scholarships are a stepping-stone to future support for the students’ research careers. The Goldwater Foundation has honored 70 UMD winners and five honorable mentions since the program’s first award was given in 1989.

He has been doing this research with Peter Kofinas, chair of UMD’s Department of Chemical and Biomolecular Engineering, for two years with scholarship support from the university’s ASPIRE (A Scholar's Program for Industry-Oriented Research in Engineering) program.

Matthews co-authored a paper accepted for publication in the journal Electrochimica Acta and was selected as the top student poster presenter in a fuels, petrochemicals and energy category at the 2019 American Institute of Chemical Engineers Annual Meeting. He also received the Dinah Berman Memorial Award, which honors one junior engineering major at UMD who shows outstanding scholastic, leadership and service endeavors.

“These are remarkable accomplishments for an undergraduate and clearly demonstrate a strong work ethic,” Kofinas said. “I am confident he will contribute to many more impactful experimental results over the remainder of his undergraduate career.”

In the field of mathematics, Matthews worked for two summers with Radu Balan, a professor of mathematics and the Center for Scientific Computation and Mathematical Modeling, to improve noise reduction in signal processing for speech recognition and X-ray crystallography.

After he graduates, Matthews plans to pursue a Ph.D. in chemical engineering focusing on developing innovative alternatives to current energy production methods.

Moroch, a native of Wayne, New Jersey, designed his own particle accelerator when he was still in high school. Since enrolling at Maryland, he has been working on UMD’s cyclotron with Timothy Koeth, an assistant professor in the Department of Materials Science and Engineering and the Institute for Research in Electronics and Applied Physics.

A cyclotron is a type of particle accelerator that won its inventor the Nobel Prize in physics in 1939. The beams that cyclotrons produce, while potentially dangerous, accomplish wondrous things—killing cancer cells with extreme precision, for instance, or changing atoms into a different element altogether.

Moroch is working with Koeth to develop a novel cyclotron storage ring for Lockheed Martin. The company is interested in using the technology for a new class of power supplies for aerospace electric propulsion systems that can carry things into the solar system and beyond.

With initial funding from Lockheed, Moroch showed that a cyclotron design could be effective, but it was unstable. So the company decided to fund a more ambitious project at UMD—where the instabilities could be factored out. Moroch now leads a significant portion of the research team.

“Scott is no ordinary exceptional student,” said E. H. “Ned” Allen, senior fellow and chief scientist at Lockheed Martin. “He has won so much respect that he has become a colleague and a first-line team member—even though still an undergraduate.”

Last summer and fall, Moroch led a team of three undergraduates in assembling and upgrading a low-energy storage ring as part of the project. A storage ring is a type of particle accelerator in which a continuous or pulsed particle beam may be kept circulating typically for many hours. The students retrieved used components from another university, restored the retrieved components, designed and fabricated missing subsystems, reassembled them into a working ion storage ring, and brought the whole assembly under high vacuum. The new accelerator got up and running early in the spring semester, achieving what’s known as “first beam.”

“In the past 20 years, I have mentored several dozen undergraduate researchers, and Scott Moroch is the first that has demonstrated the entire cycle of research and brought in substantial research funds,” Koeth said.

Oh—who immigrated from South Korea before first grade and went to high school in Germantown, Maryland—has conducted RNA research in laboratories at both the National Institutes of Health (NIH) and UMD.

At the NIH’s National Cancer Institute (NCI), Oh analyzed non-coding and coding RNA (global miRNA and mRNA, respectively) and protein expression to identify potential pathways that would explain how a natural compound called butylcycloheptyl prodiginine (bPGN) blocks the proliferation of cells. This work resulted in a co-authored paper published in 2019 in the journal Cell Chemical Biology.

“Seungtaek’s ability to comprehend complex scientific concepts and experimental techniques both in lab practices and in literature research surpasses others I have trained,” said Barry O’Keefe, chief of the NCI’s Molecular Targets Program. “He is eager to learn, curious, creative, thorough and thoughtful, and he shows sincere passion for scientific research.”

In a different NCI laboratory, Oh worked with Joseph Ziegelbauer to investigate circular RNAs (circRNAs), which are a class of non-coding RNA that have been linked to a variety of disorders including cancer, diabetes and Alzheimer’s disease. The unique properties of circRNAs make them difficult to study using conventional methodologies.

Through his research, Oh identified RNA binding proteins potentially involved in the regulation of circRNAs upon Kaposi’s sarcoma herpesvirus infection. Expanding on his initial findings, he conducted a novel study of changes in expression profiles during infection by analyzing nearly 50,000 exons (portions of genes that code for amino acids). He identified a regulatory mechanism of specific circular RNAs that are involved in virus biology, which could significantly impact subsequent research in the field.

Back on UMD’s campus, Oh is studying RNA dynamics and structure in a hepatitis B viral system using nuclear magnetic resonance spectroscopy. This research—performed with Kwaku Dayie, an associate professor in the Department of Chemistry and Biochemistry—aims to improve our understanding of RNA’s biological functions and molecular interactions with potential drug therapies.

The AMINO algorithm code is open source and is already being used by other research groups and pharmaceutical companies to help improve their modeling and workflow of drug design. AMINO helps scientists overcome the barrier of needing a priori information about the system they are looking at.

AMINO led to a first-author scientific paper for Ravindra, which was published in the journal Molecular Systems Design & Engineering in 2019.

“Along with graduate students in my lab, Pavan continues to apply AMINO to different ambitious and relevant problems, such as how molecules fundamental to life—proteins, DNA and RNA—adopt different shapes and forms,” said Pratyush Tiwary, an assistant professor in the Department of Chemistry and Biochemistry and the Institute for Physical Science and Technology. “Predicting this flexibility is often the key to designing effective, nontoxic drugs for different diseases. Pavan’s method is helping make it possible to predict this flexibility in an inexpensive, effective and insightful manner.”

In addition to his campus research, Ravindra also worked at the NIH’s National Institute of Neurological Disorders and Stroke with Jeffrey Smith (B.S. ’73, zoology). There, he developed a computational model of neurons in the pre-Bötzinger complex, an area responsible for regulating intrinsic breathing patterns in humans.