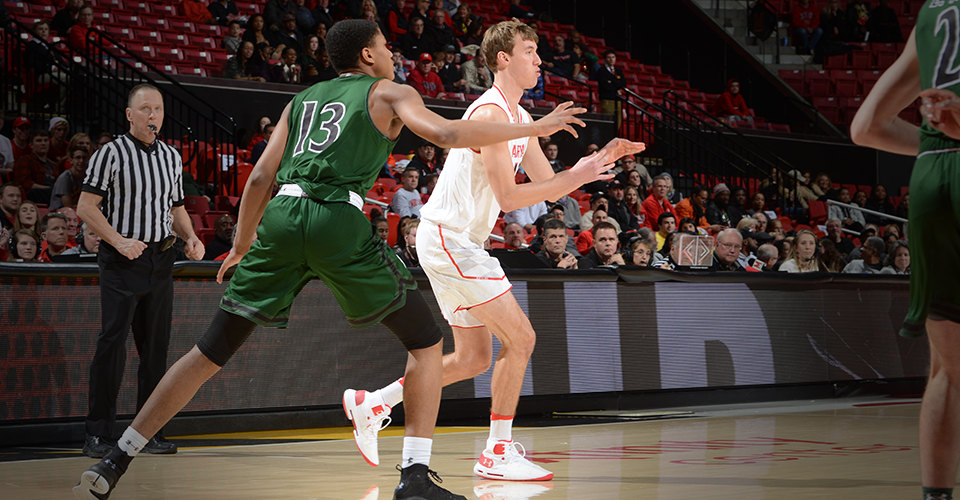 The math major, who played pick-up games at the Eppley Recreation Center as a freshman, was a reserve on the men’s basketball team as a senior.

Will Clark went to 2017’s Maryland Madness, one of the UMD basketball teams’ preseason fan events, and joked with friends about sneaking into the men’s layup line.

He passed on the prank then, but one year later, he was doing the drill alongside Bruno Fernando and Jalen Smith as his pals cheered from the stands.

During Clark’s junior year, Head Coach Mark Turgeon’s Terps were looking to add some height, the 6-foot-8-inch club player measured up, and now the walk-on is living the dream of just about any club athlete.

“It was a little bit intimidating,” Clark says of joining the team, “but it was pretty awesome just to see it all up close and be a part of it.”

A Baltimore native, Clark grew up a UMD fan and remembers his dad listening to games on the radio as former Head Coach Gary Williams ’68 led the Terps. He played varsity ball at Loyola Blakefield in Towson, Md., where the competition included future Maryland teammates Smith and Darryl Morsell. He wanted to attend a big university, but accepted that he wouldn’t make a Division I roster.

Once Clark arrived at Maryland, he didn’t leave basketball behind. He played pickup at the Eppley Recreation Center and joined the club team his sophomore year. A couple of practices into his junior season, Drew Tawiah, the club president, plucked Clark out of the lineup. He was the only athlete there to meet a call from Turgeon’s team for a player at least 6 feet, 7 inches tall.

Clark passed the tests on and off the court, and before he knew it, he was guarding Smith, getting tips from Fernando and teaming up with Eric Ayala.

Clark relished an opportunity very few get. He scored his first points against Oakland last November and played his last collegiate game on March 8, 2020, in the Xfinity Center against Michigan on Senior Day, when the Terps earned a share of their first Big Ten regular-season title.

To read more about Will Clark’s basketball journey, visit https://dbknews.com/2020/01/08/maryland-basketball-will-clark-walk-on-eppley-xfinity/

Annie Dankelson contributed to this article.