We would like to welcome Cleve Moler to our department.  Cleve is the founder and Chief Mathematician of Mathworks.  He was the driving force in the development of Matlab. He is a highly distinguished scientist, with honors including the National Academy of Engineering, the SIAM Prize for distinguished service to the profession, and the IEEE John Von Neumann Medal. 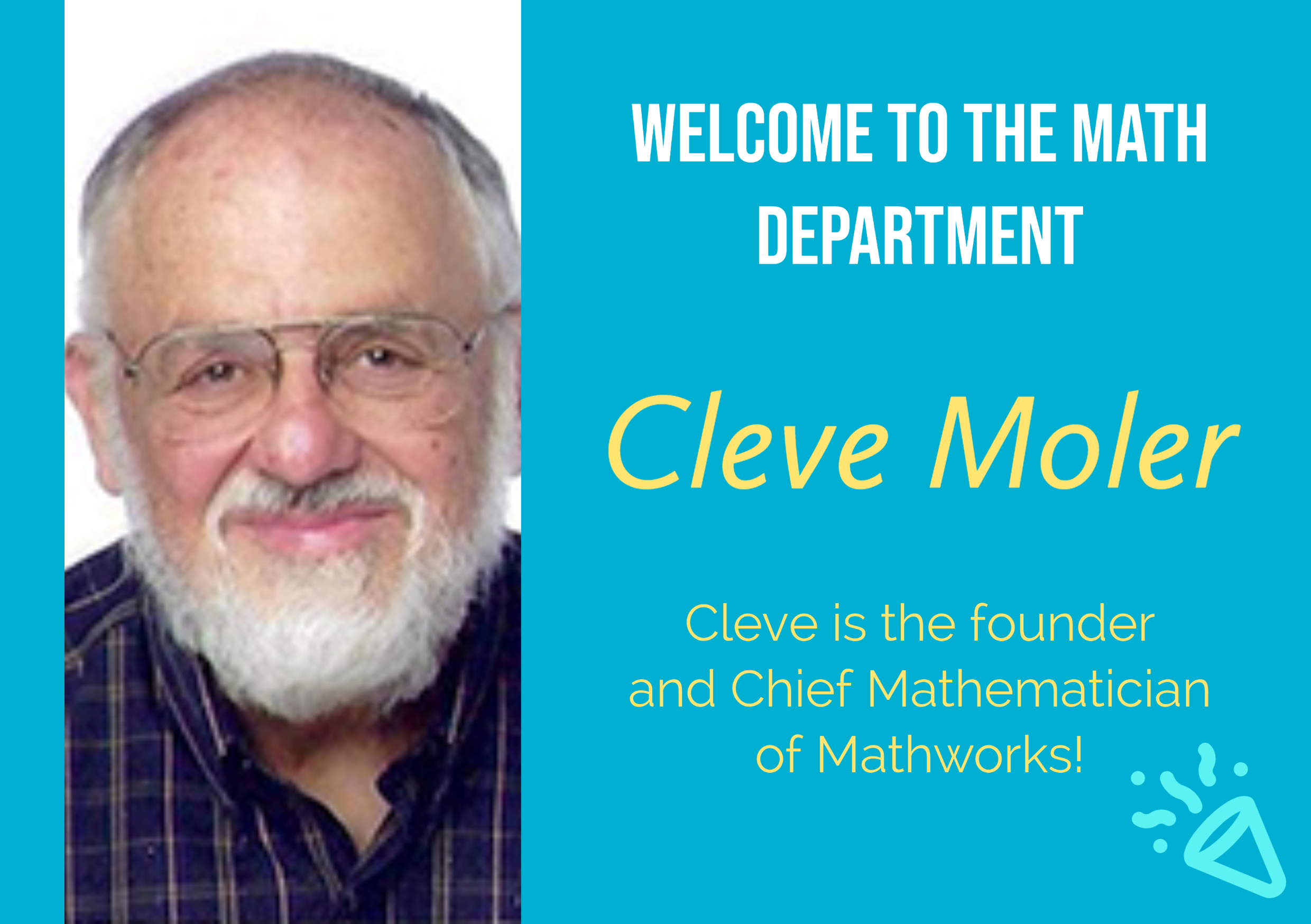 We are pleased to announce that Vadim Kaloshin will receive a gold medal from the International Consortium of Chinese Mathematics (ICCM) for his joint paper with Guam Huang and Alfonso Sorrentino, “Nearly circular domains which are integrable close to the boundary are ellipses”. The award is given to 20 papers that are chosen among papers that were written within the past 5 years.

Congratulations Dmitry Dolgopyat, for being elected as a foreign member of the Academia Europaea, www.ae-info.org.
The Academia Europaea is a continent-wide academy with individual members from Council of Europe states and from other nations across the world.

University of Maryland Mathematics Professor Konstantina Trivisa has been named director of the university’s Institute for Physical Science and Technology (IPST) for a one-year term, effective July 1, 2020. She replaces Wolfgang Losert, who served as interim director for the past year.

“Konstantina has a strong record as an educator and researcher,” said Amitabh Varshney, dean of UMD’s College of Computer, Mathematical, and Natural Sciences. “As a researcher whose work crosses disciplines and frequently bridges the biological and physical sciences, she will be a great leader for IPST.”

IPST’s mission is to pursue interdisciplinary research and education in emerging areas at the boundaries between physics, chemistry, the mathematical and life sciences, and engineering.

“It is a great honor,” said Trivisa, who has served as associate director of IPST since 2014. “In these unprecedented times, when everything is changing, the interdisciplinary role of IPST and its world-class faculty will keep our college and university at the forefront of scientific discovery and education.”

Read the rest of the article on the CMNS Website.

Doron Levy has been named chair of the University of Maryland’s Department of Mathematics for a three-year term, effective July 1, 2020. Levy served as interim chair for the past year while Scott Wolpert took a sabbatical, and then Wolpert decided to retire this summer.

“Doron has been an outstanding leader over the past year, even during extremely challenging times caused by the novel coronavirus,” said Amitabh Varshney, dean of UMD’s College of Computer, Mathematical, and Natural Sciences (CMNS). “He has received overwhelming support from the faculty, staff and students in the department to continue in this leadership role, and I am looking forward to celebrating his accomplishments over the next three years.”

Levy joined the department as an associate professor in 2007, was promoted to professor in 2011, and served as the associate chair for undergraduate studies from 2012 to 2016 and 2018 to 2019. He also holds a joint appointment in the Center for Scientific Computation and Mathematical Modeling.

As chair, Levy oversees academic, administrative and budgetary matters for the department, which has over 100 tenured/tenure-track and professional-track faculty members, nearly 800 undergraduate majors and 200 graduate students, and teaches about 10,000 students a semester.

“I would like to thank Dean Varshney for his strong support and commitment to the Math Department. It has been a great pleasure to work with him over the past year. I thank him for his leadership, and I am looking forward to working with him in the years to come,” Levy said. “I am also thankful to all my colleagues—students, staff, and faculty—for believing in me and for working as a team to better our department. We are facing great challenges ahead and I am confident that we will emerge stronger and better.”

Levy’s year as interim chair has been a busy one. He hired four faculty members, including Bassam Fayad, who will be the inaugural holder of the Michael and Eugenia Brin Distinguished Chair of Mathematics. He also boosted the department’s fundraising efforts, securing the largest single gift in department history: a $6.5 million estate gift from Carol Fullerton, daughter of the late Nobel Laureate Herbert A. Hauptman (Ph.D. ’55, mathematics). The gift establishes the Herbert A. Hauptman Endowed Graduate Fellowship Program.

Since mid-March, Levy has been leading the department’s shift to online teaching due to the COVID-19 pandemic. This was a monumental task for the department, which teaches more students than any other unit on campus.

During his term as department chair, Levy plans to launch several initiatives. The expected wave of faculty retirements will provide opportunities to recruit top talent to the department. By launching new K-12 programs that support diverse communities in the state of Maryland and beyond, he hopes to increase the department’s outreach and inclusion efforts.

In addition, Levy intends to overhaul the department’s undergraduate honors program, with the goal of attracting the best math students to UMD by offering unique educational opportunities. He also plans to continue his fundraising efforts, with goals of expanding the department’s postdoctoral fellow programs and establishing a Math Research Center that will provide a vibrant research environment for pure and applied mathematics and statistics.

Among his many distinctions, Levy was named a 2017-18 fellow in the Big Ten Academic Leadership Program, a Pauli Fellow of the Wolfgang Pauli Institute in Vienna and a Guggenheim Fellow. In 2013, he was named a UMD Distinguished Scholar-Teacher.

Levy’s research focuses on biomedical applications of mathematics with a particular interest in cancer dynamics, drug resistance, immunology, imaging and cell motility. He is a member of the Maryland Biophysics Graduate Program and the Applied Mathematics, Statistics, and Scientific Computation Graduate Program, and he serves as a co-director of the NCI-UMD Partnership for Integrative Cancer Research.

During Wolpert’s time as chair from 2013 to 2019, the department hired eight assistant professors and 15 long-term lecturers. The department also experienced a nearly 20% increase in undergraduate enrollment and an increase in the number of department-funded postdoctoral fellows.

As chair, Wolpert secured a five-year visiting professor appointment for Michael Rapoport, who currently holds the department’s Michael and Eugenia Brin E-Nnovate Endowed Chair in Mathematics. Wolpert also served as the campus lead on the Ithaka S+R Adaptive Learning in Statistics (ALiS) project, which was supported by the Bill & Melinda Gates Foundation. The project aimed to improve student learning in elementary statistics through a partnership of seven two-year and four-year public institutions in Maryland.

Also during his term as chair, the university named the math building William E. Kirwan Hall, and Wolpert oversaw the renovation of the department’s colloquium room, Herbert Hauptman Hall, inside the building.

Kimbra Cutlip contributed to this article.

Roohollah Ebrahimian was selected to receive the Provost’s Excellence Award for Professional Track Faculty in recognition of his outstanding contributions and accomplishments in service.  The selection committee recognized his extraordinary service to the Math Department which includes his outreach activities - from elementary, middle and secondary school students, to undergraduate students.  The committee particularly noted leadership roles Roohollah played in the Maryland High School Math Competition and the Putnam Competition.