We regret to report the passing of Professor Emeritus Maurice Heins, who at one time held a distionguished professorship in complex analysis in our department. Maurice Heins received his PhD in mathematics from Harvard University in 1940.  He was a highly prolific scholar and enjoyed a long and distinguished career in academia.  His research interests were varied but focused primarily on complex and harmonic analysis.  He was the author of close to 100 research papers, published in the most prestigious journals, and three textbooks on complex analysis.  He is especially known for his work on Hardy classes of functions defined on Riemann surfaces and on conformal metrics.

Known for his kind and gentle demeanor, Professor Heins was widely sought as a mentor and advisor.  He was the thesis advisor for some nineteen students over the course of his career.  Although he retired from his professorship at the University of Maryland, he continued to pursue his research interests, publishing papers into the 1990s.  He was a Fellow of the American Academy of Arts and Sciences and also the American Mathematical Society.

A longer obituary may be found here.

2015 NSF Graduate Fellowships have been announced. Congratulations to our majors Rafael Setra and Kevin Stubbs.

Congratulations to Professor Emeritus Raymond L. Johnson who has been awarded the Presidential Mentorship Award in 2015. Presidential Award for Excellence in Science, Mathematics and Engineering Mentoring (PAESMEM) is America's highest mentoring award. PAESMEM recognizes outstanding efforts of mentors who play a vital role for many science and engineering students and early career scientists, on both a personal and professional level. Mentors play a crucial role for all students but especially for students from underrepresented groups--including minorities, women, and people with disabilities. The National Science Foundation (NSF) administers PAESMEM on behalf of the White House.

Professor Raymond L. Johnson, University of Maryland, receives this honorable award for his guidance to many minority students. His service at the University Math department spans forty years. His contribution to the community began at his home institution and across the nation. He has guided students to complete degrees in mathematics, which has notoriously low retention rates. He was promoted through the ranks at Maryland, surviving long enough to become the first African American to go from Assistant Professor to Chairman of the Math Department (1968 - 1990). He is also the first African American faculty member with the longest tenure at College Park. During his term at the University he has personally mentored 23 students who have received Ph.D. degrees in mathematics. Twenty two of these students are African Americans and eight are females. Beyond his work at UMD, Professor Johnson has been influential at the national level in fostering greater opportunities for African-American students to earn Ph.D.s in mathematics, as part of two National Science Foundation supported mathematical institutes at the University of California, Berkeley and the University of Minnesota and with the Mathematical Association of America.

Professor Raymond L. Johnson is already the recipient of the Distinguished Minority Faculty Award and the Mentor Award for Lifetime Achievement from the American Association for the Advancement of Science in 2007. He was honored by his alma mater - the Association of Rice Alumni and the Association of Rice University Black Alumni (ARUBA) on November 8, 2014, and received special recognition from the City of Houston and the State of Texas.

Honorable Professor Raymond L.Johnson is one of the select group of 14 individuals receiving the Presidential Award this year.

With great sorrow we announce the passing of Professor Emeritus John Horváth on March 12, 2015 at the age of 90.   Horváth was always the "gentleman scholar" of the department, and his distinguished career spanned the whole transition from the early years of analysis in the first half of the 20th century to modern mathematics as we know it today.  He studied under the great masters L. Fejer and F. Riesz at the University of Budapest, completing his Ph.D. there in 1947.  He held positions at CNRS in Paris and at the Universidad de los Andes in Bogota before settling at Maryland in 1957.  You can read some of his reminiscences of the early years of our department here. Horváth served for 15 years as an associate editor of the Journal of Mathematical Analysis and Applications. He officially retired from Maryland in 1994.  However he remained quite active and continued publishing up until very recently.  Horváth published in English, French, German, Hungarian, and Spanish. In 1998, he was elected to the Mathematics Section of the Hungarian Academy of Sciences, and he also received an honorary doctoral degree from the Universidad de los Andes in Colombia in 1997.   Among his many works are a textbook Topological Vector Spaces and Distributions (1966, recently reissued with the cover shown below), a nice Introduction to Distribution Theory in the American Mathematical Monthly, 1970, and a two-volume work A panorama of Hungarian mathematics in the twentieth century (cover shown below), which he edited for the Bolyai Mathematical Society in 2006. 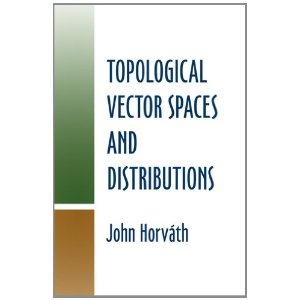 Below is a letter sent by the president of the Universidad de los Andes to President Low about Professor Horvath. 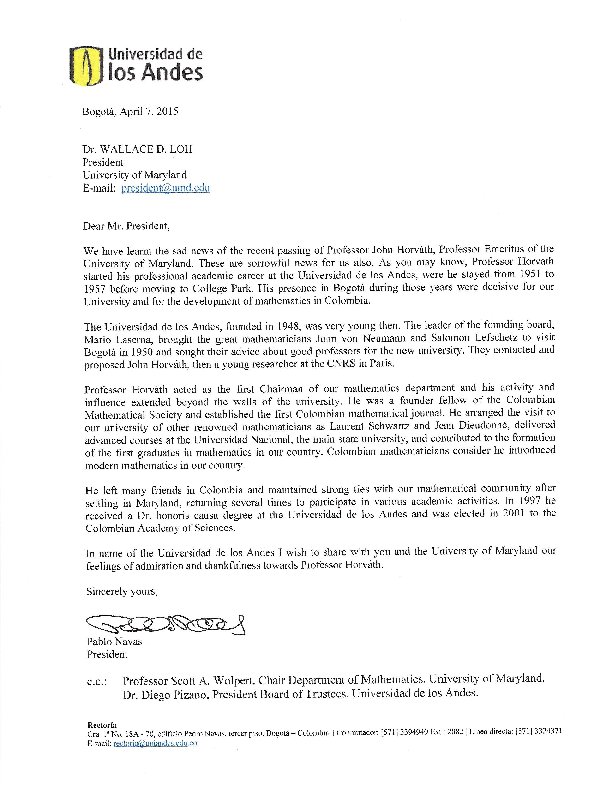 This program is funded by the generous gift of Professor Michael Brin in 2005. Professor Brin is an emeritus professor of mathematics at the University of Maryland. The Brin Postdoctoral program supports mathematicians who have recently completed or will soon complete a doctorate in mathematics or a closely related field, and whose work shows remarkable promise in mathematical research. The appointments are for one to three years, with a minimal teaching requirement of up to one course per semester.